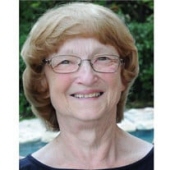 Valeria Marie Krenzel was born December 14, 1940, in Orrin ND, the daughter of Isidor and Walburga Krenzel. Val grew up in Fargo, ND, and met her future husband Ronald J. Nicklay while cruising Broadway. On September 3, 1960, she married Ronnie at St. Anthony's Church in Fargo. Together at age 20 and 19 they built a home in north Moorhead, MN, to move into upon their marriage. As newlyweds, Val worked part time at the Bluebird Cafe and they established Nicklay Woodworking. In 1966, they built a home in south Moorhead and throughout the years siblings, nephews, nieces, cousins and friends were cared for under their roofs.

On September 1, 1961, Val gave birth to daughter Kimberly. She was so proud and told all Kim was an attorney and Dallas judge. Kim would have never become a lawyer without Val's tenacity, asking repeatedly "Are you going to be a lawyer as you said in your junior high essay or what?"

Val and Ron's son, Ronnie Jr., born in 1962 died as a baby and son, Lonnie, born in 1967, passed at age 14. Losing a child is unbearable and losing two is unimaginable. Val struggled with the loss of her boys, but found comfort in Lonnie's Park at West McDonald Lake, by Vergas MN. A park She and Ron transformed from woods and pasture into a memorial haven. Thousands of visitors enjoy the park and many weddings have been held there, including their daughter's. Val hosted numerous gatherings at the lake house, Lonnie's Park, and their Moorhead home. Everyone was always welcomed.

She was preceded in death by her parents; husband, Ron; sons, Ronnie, Jr. and Lonnie; and brother, Marvin Krenzel.

A Celebration of Life will be held when conditions permit. In lieu of flowers the family requests you enjoy time with family and friends treating them to a meal or drink as Val so often did.