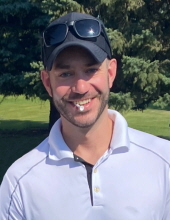 **Please Note the change of location for the Funeral Service on Tuesday at 12:00 PM**

Trevor M. Tharaldson, 33, of Minneapolis, MN, formerly of Fargo, ND, passed away in his home.

Trevor was born on December 12, 1988, in Grand Forks, ND, to Michael and Jackie. On August 30, 1992, the family welcomed his baby sister, Meghan who quickly became his best friend. They moved to Fargo in October 1993. Trevor attended school in Fargo and graduated from Fargo South High School in May 2007. It was that same year that Trevor gained his stepdad, Chris Reyerson.

Trevor was passionate about sports from a young age and held on to that passion throughout his entire life. He played multiple sports growing up, but hockey was top of the list, playing for the Patriots as a young boy, Outlaws during middle school and both the Fargo Flames and Junior Gold for West Fargo during high school.

Trevor then went on to college, following his mother, Jackie's, footsteps and attended the University of North Dakota in Grand Forks, which was also where his father, Michael, grew up. His love for hockey was one of the things that brought him to UND, home of the Fighting Sioux hockey team and he was able to share this passion with his father. In the fall of 2009, Trevor and Dan, his best childhood friend from Fargo, joined the Fraternity Delta Tau Delta. It was there that Trevor met some of his very dearest friends who have remained so to this day. His sister, Meghan, followed in his footsteps and joined him at UND in 2010.

In May of 2013, he graduated with a bachelor's degree in civil engineering, getting his first job as a Civil Engineer with AE2S where he was still currently employed. It was both work and to be closer to his sister, Meghan, that brought him to Minneapolis in April of 2021. Trevor loved his job. His dedication and commitment to his job was very apparent and he rarely ever missed a day.

Moving to Minneapolis allowed Trevor to be closer to many of his lifelong friends. They enjoyed a LOT of golf during this time. Secondly, he was able to be closer to his sister, whom he loved dearly. Together they enjoyed lots of dinners, activities and games of Monopoly Deal, as well as attending Colorado Avalanche Hockey Games, his all-time favorite team!

His love for Maple Lake started shortly after he was born. Growing up, summers were spent swimming, skiing, boating, wakeboarding, playing night games and having bonfires. It was there Trevor met Dusty, one of his greatest and longest friends to this day. Even as an adult, Trevor made it a priority to go to the lake as often as he could.

On August 4, 2019, Trevor got the new title of Godfather, when his Godson, Carter Dukart, was born to his best friends, Josh and Sara Dukart. In addition to his working job, Trevor, took the job of godfather very seriously. He loved Carter as his own and never missed an opportunity to spend time with him. The same love carried on and was shared when Caia Dukart was born on April 17, 2021.

Trevor had the biggest, kindest heart. He was the best son, brother, friend, and Godfather. His wit, sense of humor and laugh brightened the day of anyone he encountered. He was loyal, dependable, and never missed an opportunity to show up for those he loved.

What a blessing his 33 years in this world were to anyone that had the privilege of knowing him. We will miss him every day until we reunite in Heaven!

His Funeral Service will be 12:00 PM, Tuesday, May 31, 2022, in Grace United Methodist Church, Moorhead, with visitation on hour prior to his service.

The family requests you wear your favorite sports jersey in honor of Trevor.

To order memorial trees or send flowers to the family in memory of Trevor M. Tharaldson, please visit our flower store.