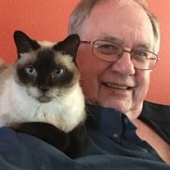 Thomas James Tepley was born 8/29/1953 to parents James Tepley and Dorothy Steuven. As a young boy he went to live with his grandparents Cletus Tepley and Catherine Barnes along with his brothers John and Bill. He graduated from Pipestone High School in 1971 and attended Moorhead State University to study art.
Tom was an entrepreneur all of his life. He owned many businesses including Disc&Tape, Discontent, and DSK8. He had a massive collection of comic books, action figures, music, and people. Talking politics was a favorite pass time as was traveling, promoting concerts, enjoying food, and spending time with his beloved family.
On 9/27/1991 he married Carol Racek. They brought together their two sons, Troy Racek (1984) and Alex Tepley (1987) and also had two children, Jordan (1992) and Kate (1994). On April 12, 2018, Tom was blessed with his very first granddaughter, Julia Pearl.

Tom and Carol enjoyed 29 years together. They saw life as an adventure and enjoyed all aspects of running their respective businesses. Tom's talent with negotiation and finances complimented Carol's abilities to create environments and systems, and they found opening new stores together as a wonderful and fulfilling challenge. The areas they worked separately on benefited both corporations as they shared ideas and developed new products and services. Tom's fearlessness and practicality in all things, and his ability to see any situation from 10,000 feet gave everyone who worked with him the freedom to be who they were in that given moment and develop their natural talents.

Tom was a kind man and a humanist. He cared deeply that everyone should be treated as an equal and he behaved as such. Through acts big and small he made impacts on so many lives. He was a part of the Fargo/Moorhead community in so many ways. From promoting large scale concerts at the Fargo Dome to organizing Halloween dances for special needs adults. Tom had an incredible ability to bring out the best in people. He could sit down and have a conversation with anyone and in a matter of minutes would be your best friend. Tom had a way of making people feel like part of his family. He never knew when to stop giving. His matter of fact attitude and strong belief in individuality propelled him to have wonderful relationships both personally and professionally.

He was a lover of music, art, and culture. Many people in the Midwest know about his record store Disc&Tape, opened in 1986, later renamed Discontent. Discontent began in Moorhead, Minnesota and has expanded to North Dakota, California, Montana, and Colorado. He strived to have his business be a welcoming place for all who visited, whether you were there to buy Wild Berry incense sticks or pick up that new record on two-dollar Tuesday. Any of Tom's employees or business associates will tell you that every single person that worked for him meant something to him. As he expanded his business, he made sure to expand the well-being of people that worked for him. He handpicked every location with his staff's future in mind. Tom's savvy business sense brought him all over the world. He was always expanding his business along with his wife Carol's business, Almost Famous Body Piercing. He created everlasting friendships and enjoyed some of the finest food the world has to offer. Tom's sharp mind and strong heart enabled him to keep friends locally and create new ones abroad. Almost everyone has a story about going to Discontent and enjoying the atmosphere or purchasing something that really meant a lot to them.

Tom will be deeply missed by his family and friends. His words of wisdom have given us all wings to soar on. He was the ultimate Game Changer. The Mayor of The Island of Misfit Toys, and the best father and husband anyone could have ever asked for.

We miss you immeasurably.

There will be a Gathering of Friends for Tom on Tuesday, May 14, 2019, from 5 - 7 PM, with a Celebration of Life service at 7 PM, in Korsmo Funeral Chapel, Moorhead.

To order memorial trees or send flowers to the family in memory of Tom J. Tepley, please visit our flower store.