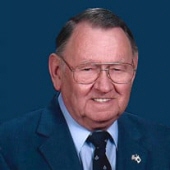 Tom was born August 21, 1933, in Minneapolis, MN, to Vaino and Lempi (Wuori) Luttio. The family moved to Minnetonka, MN, when Tom was a child and he attended Wayzata (MN) High School.

In January 1952, Tom joined the US Navy and became a corpsman serving with the Marine Corps. Tom eventually became stationed at an Air Force base in Japan during the Korean war, over which the US Army had overall command. (Tom would sometimes say that he had joined the Navy, and served with the Marines while being stationed on an Air Force base all while working for the Army.) After his honorable discharge in December 1955, Tom served in the Navy Reserve for another six years.

On July 21, 1956, Tom married Anna Mae "Annie" Goldenman, at Oak Knoll Lutheran Church in Minnetonka. They made their home in the Minneapolis area until moving to Moorhead in 1968. Together they raised four children. Tom's career in sales led to many lifelong friendships. Tom enjoyed golf, softball, camping, and spending time with his family (and BS'ing with anyone who could keep up with him, and even those who couldn't).

Tom was a member of The Lutheran Church of Christ the King in Moorhead, the Moorhead Masonic Lodge #126, the York Rite, Scottish Rite, Order of the Eastern Star, El Zagal Shrine, American Legion, and the Elks.

He was preceded in death by his parents; sister, Faith Yule; and brothers, David and Paul.

The family wishes to acknowledge and say thank you for the outstanding care and ministry provided by the VA, Sanford Home Care, Hospice of the Red River Valley, and other care givers during this time.

Visitation will be 5:30 PM-7 PM, Thursday, November 1, 2018, at Korsmo Funeral Chapel, with a prayer service at 6:30 PM, and a Masonic service at 7 PM. The memorial service will be Friday, November 2, 2018, at 2 PM at The Lutheran Church of Christ the King in Moorhead. Inurnment will be in the Columbarium at the church.

To order memorial trees or send flowers to the family in memory of Thomas Luttio, please visit our flower store.