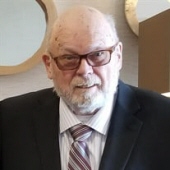 Terry was born on October 5, 1945, in Fargo, to Dale and Geri (Johnson) Lindquist. Terry attended school in Moorhead, MN, and graduated in 1962. He followed in the footsteps of his Dad and earned a Bachelors Degree in Accounting from Concordia College in Moorhead, in 1967. Terry started his own company, opening several car washes in the Dakotas and surrounding states.

After passing the Certified Public Accounting exam, he moved on to become the Chief Financial Officer of a food cannery in Brighton, CO, and later in Walla Walla, WA. In 1987, Terry moved to McMinnville, OR, to become the CFO of a cargo airline company and later a ship repair company in Portland, OR.

Just out of high school, Terry married Linda Sagen, having three children during this early period in his life.

In 1992, Terry moved back to Fargo, to take over his father's accounting practice due to Dale's failing health, eventually expanding the business and moving to Wahpeton, ND. Upon his return back to North Dakota, he met the love of his life, Helen Gehrts. They were married in Abercrombie, ND, and were happily married for twenty-five years.

Terry was a loving husband, son, and father, and will always be affectionately remembered by his grandchildren as Big Grandpa. He enjoyed spending time with his family boating, hunting, playing cards, and watching sports

He was preceded in death by his father, E. Dale Lindquist of Fargo; and his daughter, Jennifer Hahn of Sioux Falls, SD.

His Life Celebration service will be Saturday, August 17, 2019, at 1 PM, in Korsmo Funeral Chapel.

To order memorial trees or send flowers to the family in memory of Terry D. Lindquist, please visit our flower store.