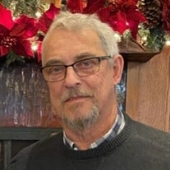 Terry was born on December 30, 1951 in Spokane, WA, to Fredrick Arthur and Edith Marian (Edwards) King. Terry was a graduate of Newport High School in Bellevue, (WA). He received his associate degree at Bellevue (WA) College, obtaining his Bachelor of Science at the University of Mary in Fargo, ND, later in life. He and Rhonda both worked for the Boeing Company in Everett, WA, from 1980 - 1995. Terry's infectious belly laugh caught Rhonda's attention and they soon began dating after playing together in a work bowling league. Terry and Rhonda were joined in marriage at Martin Luther Lutheran Church in Fredonia, ND, on June 10, 1983. The newlyweds returned to Woodinville, WA, where their children Christopher, Joshua and Allison were born. In 1996, Terry and family moved to Fargo, to be nearer Rhonda's family. He worked within the manufacturing and engineering industries until his career position at Case New Holland (CNH) where he worked from 1998 until his passing.

Terry's early life was defined by his family, friends, and adventures in Bellevue, WA. The oldest of three, Terry was looked up to by his sister and brother (Lois and Don) as being a loving force that was always there to get himself into, and them out of, trouble. Growing up in the coastal woods of Washington provided him with a multitude of activities to explore and chances to get into mischief - go carting, hitch hiking, hanging around Lake Sammamish, and camping, just to name a few. Terry had many friends who he felt were family, at any distance, for all time. He always kept his friends very close to his heart.

He enjoyed many sports, but nothing compared to his passion for baseball. He played throughout his school years, mainly as shortstop and pitcher. Following high school, he coached youth baseball and continued coaching his three children in Washington and Fargo. Terry loved to coach, and his players thought the world of him.

Terry's deep faith in Jesus strengthened him through many health situations the past 11 years. He and Rhonda are members of the Salem Evangelical Free Church, where he participated in men's Bible studies. One of his loves was being part of the Worship Team where he could express his passion for singing. He had a beautiful voice and loved using his voice to serve the Lord. He was blessed to sing the National Anthem several times at RedHawks games. We would often hear him singing and humming to himself throughout the home.

Aside from singing, he had a love for vintage cars, classic rock, reading, and learning history. Of all the things he valued in life, family and friends were at the top of his list. Everyone loved Terry and Terry loved everyone. He had such a robust laugh and presence. Although he was a quiet person, he was a calming force to everyone around him. He touched a lot of lives with his steadiness of character, his passion for life and value of family and friendship.

He was preceded in death by his parents Edith and Fredrick King.

Thank you, family and friends, for enriching his life and loving him well. We have no doubt he is singing in heaven and will see him again one day!

To order memorial trees or send flowers to the family in memory of Terry A. King, please visit our flower store.