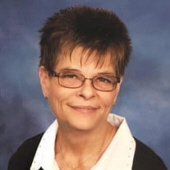 Teresa Rose Lindgren, was born July 6, 1955, the daughter of Richard and Rose (Rezac) Lindgren, in Fargo, ND. She was raised in Moorhead and graduated from Moorhead High School in 1973. Terry then attended Moorhead State Technical College where she received her secretarial degree. When Terry was in high school, she began her forty-five year career working for Kmart.

On June 26, 1976, she was united in marriage to John Baukol at St. Francis de Sales Catholic Church in Moorhead. They made their home in Moorhead where Terry continued to work at Kmart until December of 2019.

She was a member of St. Francis de Sales Catholic Church. Terry enjoyed bowling, gardening, and baking. She especially loved her children and grandchildren and attending their events over the years.

She was preceded in death by her father and mother-in-law, Bob and Betty Baukol.

A Visitation for Terry will be Tuesday from 4:00 PM until 6:00 PM in Korsmo Funeral Chapel with strict social distancing enforced at the door.

Her Mass of Christian Burial will be Wednesday, May 27, 2020, at 2:00 PM, St. Joseph Catholic Church, Moorhead, with social distancing guidelines set by the church.

To order memorial trees or send flowers to the family in memory of Teresa R. Baukol, please visit our flower store.