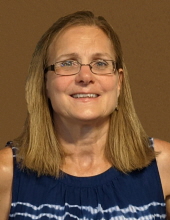 Suzy was born September 1, 1955, the daughter of Rodney and Eunice (Boe) Wyland, in Moorhead, MN. She was raised on a farm in rural Glyndon, along with her four brothers where they shared many enjoyable memories. She graduated from Glyndon Felton High School in 1973 and achieved state title in the long-jump her junior year and she held that record for 25 years.

On April 28, 1978, Suzy was united in marriage to David Olek of Felton, MN, at Glyndon Lutheran Church. They made their home in Glyndon where they raised their seven children.

Mom was very creative and placed a lot of detail into her many projects. She took pride in sewing many outfits for her children and grandchildren. Mom was a child at heart, full of life, and always up for an adventure, whether traveling the world with her family, collecting books and rocks, keeping up with the children at the playground, ice-skating, or playing competitive games. She took great pride in providing the family with many homemade meals. She went above and beyond with creating her personal touch in cakes, cookies, and special desserts.

Mom led a life of loving Jesus. She poured many years into teaching Sunday School, including teaching her grandchildren, directing programs, and actively involving herself in missions. Mom believed the greatest gift from the Lord were her children and grandchildren. She was a devoted wife and mother, always sharing unconditional love for her family. Mom was full of spunk, combined with a wonderful sense of humor.

Even though Suzy’s fight was only a couple short weeks, she fought with full determination, and when she was called home to Jesus, she had surpassing peace. It is well with her soul.

She is preceded in death by her infant son, Elijah; granddaughter, Anna Joy Trick; and mother, Eunice Wyland.

Suzy had a passion for missions, especially Operation Christmas Child. Monetary gifts will be given towards this fund. Please make checks payable to Maranatha Free Lutheran Church.