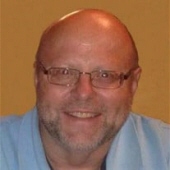 Steven Douglas Runck, the son of Robert J. and Cleone (Nybeck) Runck, was born in Fargo, ND, on December 8, 1955. He grew up and received his education in Casselton, ND, where he graduated from Central Cass High School in 1974. He graduated from Moorhead (MN) State University in 1979 with a music education degree and enjoyed playing trombone in jazz band and touring with Continental Singers. He also attended Moorhead Area Vocational Technical Institute, in electrical engineering.

On September 27, 1980, Steve married Christine M. Andersen, at Bethel Evangelical Free Church, Fargo, ND. Initially, they made their home in Moorhead, then moved to Fargo, before building their new home in Horace, in 1998.

In 1978, Steve joined the staff of KFNW Radio in Fargo and was known throughout the region for his "Davy Duck" impressions and performing in the area radio rallies. In 2008, he became a software support person at Allegiance Software, Fargo, and then for Icon Systems. He later was a bus driver for Metropolitan Area Transit, and in August of 2018, joined Transystems as a semi driver.

Throughout his life, music was an essential part of his world. He enjoyed playing bass guitar on the Bethel worship team, traveling with a mission team to Italy for outdoor evangelistic concerts, and playing with a group of friends in a band called Destiny. He also used his computer talents and radio background to help install computer systems and programs for a radio station in Haiti.

Steve is survived by his wife, Chris, Horace; a daughter, Rachael Runck, Terrebonne, OR; a son, Daniel Runck, Horace; his mother, Cleone Runck, West Fargo; a brother, Robert (Peggy) Runck Jr., Casselton; a sister, Mary Nicholas, Fargo; five nieces and nephews; one aunt and many friends. He was preceded in death by his father, Robert Sr., who died in 2007.
Visitation for Steve will be Sunday, Nov. 18, 2018, from 4 PM until 7 PM, with a prayer service at 6 PM, in Korsmo Funeral Chapel, Moorhead. His funeral service will be Monday, at 11 AM in Bethel Evangelical Free Church, Fargo.

To order memorial trees or send flowers to the family in memory of Steven D. Runck, please visit our flower store.