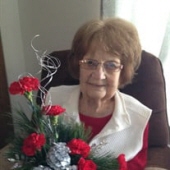 Stella Nelda Dietz was born January 16, 1917, the daughter of Christian and Barbara (Heil) Dietz, in Elgin, ND. She was raised on a farm near Elgin where she attended school. As a young adult she moved to Bismarck, ND, and began working as a nanny.

On September 16, 1937, she was united in marriage to Kenneth L. Emery in Bottineau, ND. They then moved to Washington, D.C. while Kenneth worked at the Pentagon. In the mid-1940s they returned to Fargo, ND, and then settled in Moorhead. Stella later began working for AVON and was a representative for over thirty years. After Kenneth's death on November 20, 1986, she continued to make her home in Moorhead, until moving to Elim Rehab and Care Center in 2016.

She was a founding member of Our Savior's Lutheran Church where she was active in the Ladies Aid and taught Sunday School. Stella was also a member of Eagle's Auxiliary, Royal Neighbors Auxiliary, PLS (Partners Living Single) and the VFW Auxiliary.

She enjoyed cooking, baking, flower gardening, shopping and dancing. She especially enjoyed her many trips she took over the years. Stella loved her family and spending time with her grandchildren.

She was preceded in death by her parents; husband, Kenneth; daughter, Sheila Brakke; brothers, Roy, Ernie and Ray; and sister, Lorene.

A Visitation for Stella will be one hour prior to her funeral service.

Interment will be in Moorhead Memorial Gardens, Moorhead.

To order memorial trees or send flowers to the family in memory of Stella Emery, please visit our flower store.