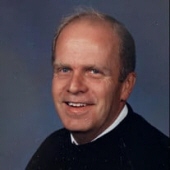 Stanley George Olson - a teacher to hundreds, mentor to many, and friend to all - passed November 9, 2020, at Sanford Medical Center in Fargo, ND, surrounded by family and friends. He was seventy-seven.

Born May 7, 1943, in Fargo, ND, to Odin and Gerda (Walz) Olson, Stan was the youngest of three children growing up in north Moorhead, MN. He attended Moorhead High School where he met his bride-to-be, Margaret Seaton. Both graduated from Moorhead High School in 1961. Stan entered the military and served two years until he received an honorable discharge. While still dating, Stan attended Crookston Community College and eventually transferred to Moorhead State University where he graduated with a degree in Industrial Arts Education.

On August 12, 1967, Stan and Margaret were married at Triumph Lutheran Brethren Church in north Moorhead. Together they entered the world of education; Margaret with the Moorhead Public School system and Stan at Moorhead Technical College. In 1973, Stan transferred to Moorhead High and he and Margaret became the Bob Villa and Martha Stewart of the High School staff where he taught Woodworking and Margaret taught Home Economics. They impacted the lives of many students throughout their thirty year career.

In 1974, their son Christopher was born. In 1981, they had a second son, Johnathan, who died nine months after birth. In 2003, Stan retired from teaching and became the local handyman for people all over the FM area. He also was one of the originators of the Fix-It-Crew at Triumph Church, where men from the church gathered together, ate Margaret's famous caramel rolls and occasionally fixed things around the church. If someone didn't know how to do something...the adage was "ask Stan!"

Stan's son, Christopher, has three children that were the apple of his eye - Colin, Lottie and Lachlan. Stan and Margie provided daycare for the younger children and "Papa" Stan would often be found at Little Lights Christian Preschool, helping with projects or just dropping or picking up the kids. It was of utmost importance for Stan that his grand-kids have a firm foundation in their faith and that Christ was the center of their hearts. In Stan's last hours, his eldest grandson Colin, shared that faith as he held Stan's hand and told him "it's ok to go to Heaven now, grandpa. I love you."

Lung cancer was the cause of Stan's death. On Sunday, November 8th, Stan collapsed at 1 am and was rushed to the emergency room at Sanford Medical Center, where he was admitted. His family gathered around him, sang his favorite hymns, joked, laughed, cried and held him close until he passed at 11:53 pm on November 9th.

His memory will be cherished and kept alive by his adoring wife, Margaret Olson; his son and daughter in-law, Christopher Olson (Lynne); his three grandchildren, Colin, Lottie and Lachlan; his sister, Donna Lauinger; and his sister in-law, Marlys Olson. He was preceded in death by his son, Johnathan; his parents, Odin and Gerda Olson; and his brother, Milan Olson.

Friends and family are invited to a visitation at Korsmo Funeral Chapel on Sunday, November 15, 2020, from 4-6 PM. A celebration of life will take place on Monday, November 16, 2020, at 2 PM at Triumph Lutheran Brethren Church in Moorhead, followed by interment at Riverside Cemetery in north Moorhead.

Current CDC guidelines of distancing and masks will be in effect for all services. Stan's service will be livestreamed on his obituary page on the Korsmo website.

To order memorial trees or send flowers to the family in memory of Stanley "Stan" Olson, please visit our flower store.