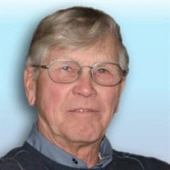 On Monday, October 5, 2020, Sidney Engelstad, 97, loving husband and father of 3 children passed away at the Veterans Nursing Home in Fergus Falls, MN. Sid was born on April 8, 1923, to Lars and Synneva (Gunderson) Engelstad in Thief River Falls. He grew up in Moorhead, MN and graduated from Moorhead High School in 1941 and attended Concordia College. Sid was married on October 22, 1950 to Gerry Western in Rothsay, MN. He is survived by his wife, Gerry, and his children Sherri (Pat-preceded in death) Wenino, Deb (Rick) Anderson and Jeff (Lez) Engelstad. Sid had 1 sister, Doris (Russ) Olsen both preceded in death, and 3 brothers,
Bob (Lu-preceded in death), Gene (Gini) both preceded in death and Larry (Ruth) Engelstad. He loved spending time with his family which also includes 7 grandchildren; Chris (Brooke), Jon, Dan, Brian (April), Brad (Ashley), Michelle (Wesley), Jace and 10 great-grandchildren and many nieces and nephews.

Sid worked for US Bank in Fargo and after retirement spent his summers at Crystal Lake and some winters in Florida. He was an avid golfer and very proud of his "three holes in one", golfing until the age of 94 on several golf leagues.

A public graveside service will be held on Saturday October 10, 2020, at 4 PM, in Evergreen Memorial Cemetery, Moorhead. A Celebration of Sid's life will be held, Sunday, October 11, 2020 from 2 PM until 4 PM in The Barn at Dunvilla, rural Pelican Rapids, MN.

To order memorial trees or send flowers to the family in memory of Sidney Engelstad, please visit our flower store.