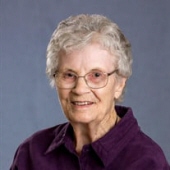 Shirley Ann Orser was born March 12, 1926, in Colgate, ND, to Loyd and Anna (Moen) Orser. Shirley was raised in Colgate where she graduated from high school in 1944. She continued her nurse training in the Nurse Cadet Corps at St. John's Hospital, Fargo, ND.

Shirley married Arthur "Mike" Endersbee on June 11, 1950, in Colgate, and they made their home in Fargo. Shirley worked as a registered nurse at the Fargo Clinic for over thirty years. She retired in the late 1980s.

Shirley and Mike moved to Moorhead, MN, in 1956. After Mike passed away on June 19, 1991, Shirley continued to make her home in Moorhead. Shirley died Friday, April 12, 2019, in Sanford Health, Fargo, at ninety-three years of age.

In addition to her parents and her husband, Shirley was preceded in death by four brothers, Oscar Melson, and Loyd, James, and John Orser.

Visitation for Shirley will be Friday, April 19, 2019, from 5 - 7 PM, with a prayer service at 6 PM, in Korsmo Funeral Chapel, Moorhead. Her funeral will be Saturday, April 20, 2019, at 11 AM, in Lutheran Church of the Good Shepherd, Moorhead. Burial will be in Riverside Cemetery, Moorhead.

To order memorial trees or send flowers to the family in memory of Shirley Ann Endersbee, please visit our flower store.