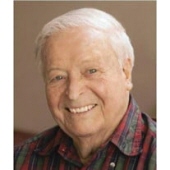 Sherman Ellsworth Hoganson was born November 5, 1918, the son of Herman and Ingeborg (Myhra) Hoganson, in Perley. He attended school in Perley through the tenth grade and then enrolled at Moorhead High School. He then attended North Dakota State University, Fargo, and later transferred the University of North Dakota, Grand Forks, ND, where he received a degree in Commerce.

Sherman then traveled extensively, including all 50 states, all provinces in Canada and most continents. He later returned to the Midwest in 1991 and lived with is ailing sister. In 2012, Sherman moved to Riverview Place and later to Rosewood on Broadway.

He is survived by his sister Lillian Richardson; and many nieces and nephews who have been helpful in his later years.

He was preceded in death by his parents; sisters, Selma Baardson, Olive Anderson-Kester, and Mabel Anderson; and brother, Howard Hoganson.

A special thanks to Shelda Warren from Sherman's family for her many years of friendship and support that greatly enhanced Sherman's life.

Details for a memorial gathering are yet to be determined, but it will likely occur this coming spring or early summer. Please watch for a future notification.