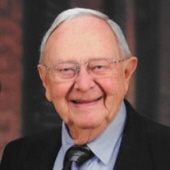 Sanford Cormac "Corky" Fuglestad, 89, passed away at home the morning of March 11, 2019, after a brief battle with pneumonia, surrounded by his wife of 60 years and his five children.

Corky was born November 9, 1929, in Fargo, ND, to Ed and Clara Fuglestad. Corky attended school in Moorhead, MN, and finished high school at Oak Grove Lutheran High School in Fargo, ND. Corky graduated Concordia College in 1954 with degrees in Psychology, Sociology, Education, and Biology. At Concordia he sang in the choir and sailed with the choir to Norway in 1949.

He received his Master's degree in Social Work from Florida State University in 1956. Corky served in the Navy as an aerologist, a "weather man," stationed in Illinois, Oklahoma, New Jersey, California, and Washington.
Corky spent his first career in social work as a psychiatric social worker in Jamestown, ND, and Austin, MN, before joining Lutheran Social Service of Minnesota as an Area Office Director in Willmar, MN, in 1961. He retired as Regional Director in Moorhead in January of 1992. Corky had a second career for 25 years as a school bus driver for the Fargo Public Schools from 1994-2009.

Corky proposed to Romayne Beth Weigand after a three-week courtship and they married on December 27, 1958. Corky and Romayne had five children and moved to Moorhead in 1968 where they lived for more than 50 years.

While Corky enjoyed his career, it was his family of which he was most proud. Corky adored his family and treasured creating experiences and memories with them. Time with family and friends - skiing, fishing, playing cards, visiting, camping - is what Corky cherished most. He and Romayne spent many retirement years traveling the open road with their 30-foot travel trailer. In recent years Corky and Romayne were able to enjoy trips to Sayulita, Mexico, and to visit family homesteads in Norway. Corky embraced experiences - whether at home or on the road - but they always involved family and friends. Corky was rich.

Visitation will be held Friday, March 15, 2019, from 4 PM to 7 PM with a prayer service and a sharing of memories at 7 PM, in Korsmo Funeral Chapel, Moorhead. A celebration of life service will be held at Oak Grove Lutheran School, Scheels Center for Performing Arts, at 11AM, Saturday, March 16th, with a luncheon immediately following at the Eid Center. Burial will be in Prairie Home Cemetery, Moorhead, in the spring.

To order memorial trees or send flowers to the family in memory of Sanford "Corky" Fuglestad, please visit our flower store.