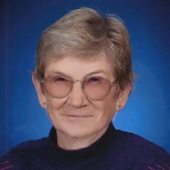 To view Ruby's Funeral Service via livestream on Monday, January 24 at 11am, please click on the link below:
https://portal.memoryshare.com/memoryshare/videoplayer/rubyi-hogenson-8121771

Ruby Ione Matson was born September 1, 1932, near Felton, MN, to Rudolph and Inga (Hilde) Matson. She attended a rural school near Felton and graduated from Felton High School in 1950. Ruby was united in marriage to Wendell Hogenson on September 3, 1955, at her family's farm near Felton. Following their marriage, they moved to Moorhead. Ruby and Wendell welcomed three children, Wes, Shelly and Wayne. While Wendell worked at Central Livestock, Ruby was a wonderful homemaker. She was an active member at Our Saviors Lutheran Church in Moorhead where she taught Sunday School and participated in women's groups throughout the years. When their kids became older, Ruby started working alongside Wendell at Central Livestock doing bookkeeping and office tasks. They worked side by side for 39 years, retiring together in 1995.

During retirement, Ruby and Wendell moved to their lake home on Big Cormorant Lake. While living at the lake, they enjoyed many years of friendship with their neighbors and entertaining their family. Ruby enjoyed teaching her grandchildren how to water ski and always had activities to keep them busy during the summer months. Ruby enjoyed dancing, birdwatching, puzzles, swimming, water skiing, fishing, and playing card games, especially pinochle. She shared a close relationship with her four sisters and loved getting together for coffee and holiday gatherings.

She was preceded in death by her parents; her husband, Wendell (2008); three sisters, Audrey (Donald) Bjorhus, Orpha (Schyler) Braseth and Mavis Corneliussen; and brother-in-law, Stanley Hammernik.

Visitation for Ruby will be Sunday, January 23, 2022, from 5pm-7pm in Korsmo Funeral Chapel, Moorhead. Ruby's funeral service will be held Monday, January 24, 2022, at 11am in Our Saviors Lutheran Church, Moorhead. Burial will be in Moorhead Memorial Gardens. A livestream link will be available here on Ruby's obituary page.

To order memorial trees or send flowers to the family in memory of Ruby I. Hogenson, please visit our flower store.