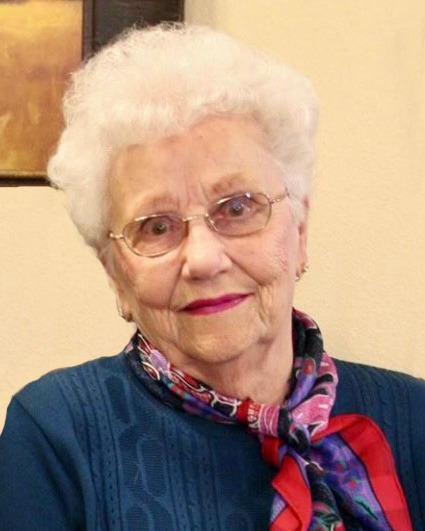 Ruby Stockstad was born March 8, 1927, to Christian and Clara (Moberg) Stockstad near Milnor, ND. After graduating from Milnor High School in 1944, she worked as a bookkeeper for the Milnor Creamery for four years. She also taught Sunday School and continued to for 25 years.

On June 15, 1947, she married Archie Hokana in the Milnor Lutheran Church.  They moved to West Fargo, ND, where daughter, Ceata, was born in 1949. In 1951, they moved back to Milnor where Archie opened his own business, and they built a home. Ruby sang in choir, and at weddings and funerals. In 1954, a son, Linton, was born.

In 1956, the apple cart was upset when the family moved to Cut Bank, MT. Once the kids were both in school, Ruby was hired by the Glacier County Library. Later she became the junior high school librarian, where she worked for the next 20 years.

In 1984, Archie was transferred to the Phillips Petroleum plant in Westhope, ND. They lived in Maxbass, ND, for two years until Archie retired and then moved to Moorhead to be close to family.

Besides teaching, Ruby loved to play bridge, sing, and walk everywhere. She served as an officer in women’s church organizations, worked on drives for Concordia College and served as an officer in the American Legions Auxiliary. Later in life her physical activities were limited due to chronic fatigue syndrome/fibromyalgia. For the last three years she continued to entertain the staff at the BeeHive Homes Assisted Living facility with her singing and dancing. She passed away peacefully, going from the caring hands of the staff at BeeHive to those of the Lord.

Ruby’s Memorial Services will be held at 1 PM on Thursday, November 10, 2022, in Lutheran Church of the Good Shepherd, Moorhead, MN. Visitation will be one hour prior to the service.

Arrangements by Korsmo Funeral and Cremation Service of Moorhead.

To order memorial trees or send flowers to the family in memory of Ruby J. Hokana, please visit our flower store.