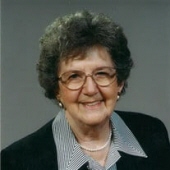 Ruby, the daughter of Alfred and Clara (Froslie) Toso, was born on March 18, 1922, at the family farm near Rothsay, MN. Ruby attended grade school in Rothsay and high school in Pelican Rapids, MN. On August 31, 1940, Ruby married Gary Danielson and they made their home in Rothsay. Soon after, Gary joined the US Navy to serve during WWII and Ruby and their new baby girl, Jacqueline Rose, moved to Fargo, ND. After being discharged from the Navy, the family moved to St. Paul, MN, where Gary attended St. Paul Bible College. Following graduation, the family moved back to Fargo, where both Ruby and Gary served at the Fargo Rescue Mission.

Ruby directed a Sunday school program, conducted a Girls Club for many of the area children and a Woman's Club. She served as a mentor and counselor to women and girls who came from depressed areas in the community near the mission and in "Golden Ridge" on the far west end of the city. She also assisted homeless women who were residents at the mission with clothing, meals, medical needs and emergency services. After Urban Renewal in the 1960s, the mission moved to its present location and changed its name to the New Life Center. It was there she expanded the Women's Auxiliary to represent over 50 churches in the F-M community. She also founded the local Christian Women's Club; established a Women's Aglow Club; and attended the National Prayer Breakfast in Washington, D.C. After attending the prayer breakfast, she established the New Life Center Auxiliary Prayer Breakfast patterned after the national event. This was founded in 1977 and continues today bringing contemporary Christian women speakers to share with area women. Ruby served on the committee to found the Valley Christian Counseling Center and served on their Board of Directors.

During the late 1960s, Ruby went back to college and graduated with a degree in Home Economics and Education in 1972 and another degree in Social Work in 1981. Ruby worked for Lutheran Social Services in Moorhead, a position she would hold for 15 years. She traveled a lot, serving rural communities, reservations and low income populations with a visionary heart health program.

One of Ruby's greatest honors was serving as the Women's Chairperson for the Billy Graham Crusade held at NDSU in 1987. Ruby always found time to volunteer and spent many years helping patients and families at St. Luke's Hospital in Fargo. Ruby always had time for family and held many reunions at the family cottage on Fish Lake near Dunvilla, MN. There were many accomplishments in her life, but her greatest desire was to live a consistent Christian life and leave a godly heritage for her children and grandchildren. Her favorite Bible verse was Philippians 1:6, "Being confident of this, that He who began a good work in you will carry it on to completion until the day of Christ Jesus."

Burial will be in Springvale Cemetery, Fargo.

To order memorial trees or send flowers to the family in memory of Ruby D. Danielson, please visit our flower store.