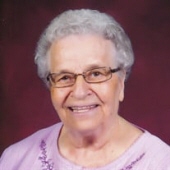 Rosie Selma Lemke, the twin daughter of Albert and Clara (Olson) Lemke, was born March 25, 1928, in Baker, MN. She grew up and attended school in Barnesville, graduating in 1946.

On November 12, 1948, she was united in marriage to Glenn Miller in Barnesville. They made their home on a farm near Baker for 50 years. Rosie farmed with Glenn for many years along with babysitting and cleaning house. In later years, Rosie and Glenn, spent winters in Yuma, AZ, and in 1998, they moved to Golden Eagle Campground near Perham for the summers. In 2004, she moved to Bethany Towers and then Fairmont Assisted Living in 2006. Since 2013, she has been a resident of Eventide on Eighth.

Rosie was a member of Our Savior's Lutheran Church in Barnesville and their Ladies Aid and Circle. She enjoyed baking bread, buns, cakes, cookies, and lemon meringue pie and was also a 4-H leader.

To order memorial trees or send flowers to the family in memory of Rosie S. Miller, please visit our flower store.