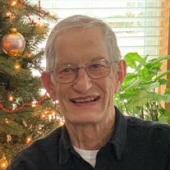 Ronald James Sonnenberg was born July 18, 1942, in Perham, MN, to Albert and Helen (Klepatz) Sonnenberg. His earthly life ended March 1, 2019, in Essentia Hospital in Fargo, with faith trusting in his Savior Jesus Christ, at the age of 76.

Ron grew up on a farm near Vergas, MN, and attended his first eight grades in a one-room country school. He graduated from Perham High School in 1960 and served in the Army National Guard from 1960 until 1964. Ron enrolled at Minnesota School of Business in Minneapolis, MN. After graduation he worked for a short time as a clerk typist at the Minnesota Department of Employment Securities in St. Paul, MN. In 1962, he began a 46-year career at what is now Minnesota State University Moorhead when he was hired as a Tabulating Machine Operator I. While working full time and raising a family, he also attended classes, usually one class per term. After 13 years he was awarded a bachelor's degree in 1978. It was jokingly suggested by his peers that some of the first classes would now be obsolete and not qualify for degree credit. As the field of Information Technology grew, Ron was instrumental in incorporating computer technology into the needs of the university through the Computer Services Department. He was promoted to Computer Programmer, Senior Programmer, Programmer Analyst and finally Computer Network Manager for the university.

On August 1, 1964, Ron married Joyce Wilke in Detroit Lakes, MN. They made their home in Moorhead, MN, and raised three children, Linda, Alan and David.

Ron enjoyed working with computers, fishing, hunting, time at the lake cabin and shopping at Menards. He liked being challenged to get computers and mechanical things to do what he wanted them to do. If orthodox attempts failed, he could find a way to rig it to accomplish his goal. He was a hardworking, frugal, practical man. He kept many things "just in case," and for him there were many opportune cases. He was not interested in stockpiling things. Just because something was showing some wear didn't mean it wouldn't still be useful for a long time. He didn't pretend to be anyone but who he was. What others thought of him never seemed to matter much to Ron. If you asked his opinion, he told you straight out, take it or leave it. But he would never enter into an argument unless he wasn't being allowed to pay the restaurant bill. He used simple words and he meant what he said. There was no "beating around the bush." He took pleasure in being different, we might say weird. That was part of his unique sense of humor. He was truly one of God's unique creations.

A Visitation for Ronald will be Thursday from 5:00 PM until 7:00 PM, with a 7:00 PM Time of Remembrance in Korsmo Funeral Chapel, Moorhead.
His funeral service will be Friday, March 8, 2019, at 11:00 AM in Triumph Lutheran Brethren Church, Moorhead.

To order memorial trees or send flowers to the family in memory of Ronald J. Sonnenberg, please visit our flower store.