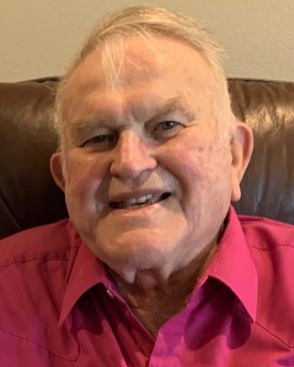 Use the link below to watch the Livestream for Ronald Baker's service.

Ronald Dale Baker was born December 20, 1930 on a farm west of Ada to Alex and Lucy (Mell) Baker.   He attended school in Ada, graduating in 1949.  While in school, he played football, basketball and was active in FFA and 4-H.  He was a member of First Lutheran Church in Ada.

In 1947, Ronald began his lifelong passion of raising cattle.  Along with being a cattle breeder, Ron was a farmer.  He raised sugar beets, small grains, corn and more.

On June 15, 1952, Ron was united in marriage to Carolyn Dosland at Bethania Lutheran Church in rural Perley, MN.   It was a hot day, followed by a thunderstorm with good rain for the crops.    Ron and Carolyn were blessed with five children, Thomas, Sharon, William, Beth and David.

Together they farmed the land, bred, showed and sold purebred horned Hereford cattle throughout the U.S., Canada and abroad and over the years won numerous awards.   In 1966, Ron was named Minnesota’s Outstanding Young Farmer.

Ron never lost his passion for the land and the animals.  He always said he would leave the land he acquired better than he received it.  Through all this, his greatest love was for God, his beloved wife Carolyn, his family and his country.  Attending his children, grandchildren and great grandchildren’s activities were important to Ron, and he cherished time spent with them.

Ron and Carolyn wintered in Mesa, AZ for several years.  In his spare time, he enjoyed woodworking.

A saying that fit Ron well, was his roll call response as FFA State Vice President symbolized by the plow.  “I am here behind the plow.  The plow is the symbol of labor and tillage of the soil. Without labor, neither knowledge nor wisdom can accomplish much.”

Memorial Service for Ron will be held Tuesday, December 27, 2022 at 11AM in The Lutheran Church of the Good Shepherd, Moorhead.  Friends and family will gather at the church one hour prior to the service.

To order memorial trees or send flowers to the family in memory of Ronald D. Baker, please visit our flower store.