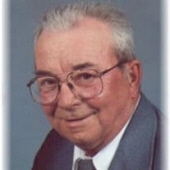 Robert Lewis Ziegler was born September 18, 1928 to Carl and Veryle (Barclay) Ziegler in Georgetown Township, MN, where he grew up and received his education. Robert worked on the family farm and for the family road construction business. He entered the US Army and served in Korea.

On November 21, 1953, he married Shirley Aabye in Perley, MN. They made their home in rural Georgetown. Robert continued to farm and work for the construction business. He also owned and operated B and S Corner Bar, Georgetown, for ten years.

Robert enjoyed spending time with his grandchildren, and hunting and fishing. He loved to socialize and joke around. He will be missed by his family and his many friends.

To order memorial trees or send flowers to the family in memory of Robert Ziegler, please visit our flower store.