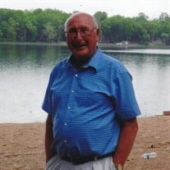 To view the recording of Robert's Funeral Mass, please click on the following link:
https://portal.midweststreams.com/services/iframe/22329

Robert James Elliott, was born May 6, 1931, in Thief River Falls, MN, the son of Rene and Corrine (Sale) Elliott. Bob spent his childhood years in Thief River Falls and attended school through the eighth grade. In 1966, after starting his family and career he obtained his GED through the Hawley (MN) School System. Bob began working as a very young man for various retailers and driving delivery truck in the Thief River Falls area. In 1950, he entered the U.S. Marine Corps serving during the Korean Conflict.

On June 19, 1952, Bob was united in marriage to Shirley Plante in Brooks, MN. In 1955, he had begun his career with Minnesota State Patrol and they lived in Thief River Falls for short time. The family then moved to Moorhead before settling in Hawley where they made their home until 1986. During the years while raising their children, the family enjoyed spending time at their lake home on Big Cormorant Lake. Bob retired from the State Patrol in 1986 and then worked for the Clay County Sheriff's Office as a courtroom security officer. After retirement, Bob and Shirley lived on Lake Ida while spending their winters in Mesa, AZ. They moved to Farmstead Care in 2015. Shirley passed away on July 10, 2016.

Bob and Shirley loved to travel, had many great camping trips with family and friends, and two amazing trips to Mexico with their children. Family was important, something Bob and Shirley were very proud of. Over the years they spent many hours at their grandchildren's and great-grandchildren's events. Bob loved playing cards and taught his grandchildren and great-grandchildren how to play different games. Sometimes he followed rules and sometimes he didn't. We have also heard from many of his friends at Farmstead that the rules sometimes changed, depending on what cards Bob was holding.

Bob loved to visit and will always be remembered as a very kind and loving man. He was extremely loved and respected by all who knew him and he truly made the world a better place.

Bob's family would sincerely like to thank the staff at Hospice of the Red River Valley for their care. Also, a huge thank you to all the staff and residents of Farmstead Care for making such a comfortable and loving home for dad. He loved all of you.


A Visitation for Bob will be Thursday from 5:00 PM until 7:00 PM, with at 7:00 PM, Prayer Service, in St. Francis de Sales Catholic Church, Moorhead. His Mass of Christian Burial will be Friday, August 6, 2021, at 11:00 AM, in the church and burial will take place in St. Joseph's Catholic Cemetery, Moorhead.

To order memorial trees or send flowers to the family in memory of Robert "Bob" J. Elliott, please visit our flower store.