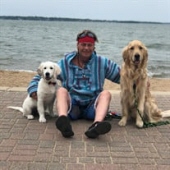 Richard Duane Folstrom was born September 21, 1963, in Wheaton, MN, the son of Gerald and Jean (Beaton) Folstrom. He was raised in Moorhead and graduated from Moorhead High School. In 1981 he joined the United States Army and was traumatically injured in a parachute accident. Upon his Medical Discharge from the Army in 1983, he returned home to Minnesota. Over the years, Richard resided in Minneapolis, MN, Sauk Centre, MN, Hillsboro, ND, and Moorhead.

Richard loved the outdoors, whether it be hunting, fishing, taking his dogs to the lake or driving his jeep. He was a dog trainer and helped other people train their dogs. Richard also had a big heart and loved helping others when he could.

He is survived by his fiancé, Elaine; parents, Gerald and Jean; daughters, Jordan, Callie and Jacie; granddaughter, Rayne; and sisters, Brenda (Jason) and Geri (Brian).

To order memorial trees or send flowers to the family in memory of Richard R.T. Folstrom, please visit our flower store.