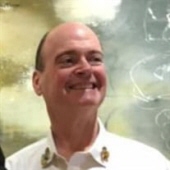 Richard was born on September 8, 1957, and grew up on his parent's farm west of Hendrum, MN and graduated from Hendrum H.S. Class of 1975. He attended the University of Minnesota, Minneapolis Campus, before he moved to Seattle, WA, January 1981. There he lived near his sisters, Sara Canning & Elizabeth Canning-Payson and Elizabeth's daughter, Alisa. He earned his bachelor's degree in International Business, June, 2012, from Antioch University and continued graduate studies at Seattle University. He died in an auto accident on December 18, 2019, on his way to work.

He was the esteemed publisher of the magazine 'Homes and Condos for Rent', a free advertising magazine distributed in the grocery stores in the Seattle metro area from April, 1994 - April, 2001. Richard enjoyed his work for 15 years at Costco Travel Seattle corporate office until his death. Richard enjoyed over 33 years of sobriety in his life. Every person he met was instantly his friend. His joyous smile and quick wit will be greatly missed by his many colleagues, family, and friends.
Richard is survived by his sister, Sara Canning; brother, Charles (Christine) Canning; his life partner of 38 years, Russell Hall; nieces, Alisa (Peter) Bokulich, Andrea Canning; nephews, Tom Canning, Jeff (Julianne) Canning, and Benjamin (Chelie) Canning; great-niece, Olivia Canning; great-nephews, Julian Bokulich, Kai Bokulich and Alexander Canning. He was preceeded in deathby his beloved parents, Richard Gordon Canning, Sr. and Lillian Margaret Canning; his older brother, James Harry Canning; older sister, Elizabeth Canning (Doug) Payson; and great-nephew, Aiden Canning.

Burial for Richard will be held on Wednesday, September 8, 2021, at 11 AM, in Immanuel Lutheran Cemetery, Hendrum, MN.

To order memorial trees or send flowers to the family in memory of Richard G. Canning Jr., please visit our flower store.