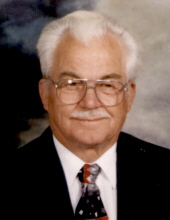 Richard William "Dick" Krauth, 93, died in his Pelican Landing apartment surrounded by his family and caregivers on June 5, 2022.

Dick was born on April 12, 1929, in Dumont, MN, to Lambert and Marie (Doll) Krauth. He graduated from Barnesville High School. He married Audrey Jean Griffin on April 11, 1951, at Assumption church in Barnesville, MN. They raised their four children in Moorhead, MN. The family has grown to include 10 grandchildren and 22 great-grandchildren.

Dick served in the Navy from April 1946 until March 1948. He served on the USS Theodore E Chandler where he completed 1st mates electrician training. On his discharge, he went to Wahpeton State School of Science for electrical lineman training. He spent his career employed by the Moorhead Public Service Department. He began on May 15, 1950, as a lineman and finished his career as the distribution superintendent. He retired on June 24, 1985. He did some consulting work for the City of Burbank, CA, and for the City of Moorhead after retirement. In 1988, he started to teach electrical safety training to Moorhead elementarystudents part time.

He loved interacting with children. He finally fully retired at the end of the 2001 school year. Dick enjoyed the outdoors. He loved to hunt with his sons, friends and brothers-in-law. He enjoyed fishing in his earlier years. He became an avid golfer, participating in seniors leagues in Moorhead and in Texas. He and Audrey wintered in Texas for many years, enjoying Brownsville and South
Padre Island. A high light every year was his family time at "the Condo" in Detroit Lakes every summer with all the family coming together during those weeks. He embraced his role as family patriarch and his most famous advice for each of us as we married was to remember these words: "Yes dear!" He was proud to be a 4th degree Knight in the Moorhead Knights of Columbus Council 4463.

He was preceded in death by his beloved wife of 62 years, Audrey and son, Rick.

The family wishes to thank Pelican Landing for the amazing care and compassion they showed Dick and the family.

His Mass of Christian Burial will be 11:00 AM, June 17, 2022, in St. Joseph Catholic Church, Moorhead, with visitation one hour prior to his service.