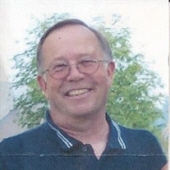 Join us Monday, March 1 at 2PM, to view Richard's Celebration of Life via livestream by visiting: https://online.atonement.live
or: https://www.youtube.com/channel/UCBhtGHQhFHEeDCkcGATxe8A

Richard Paul Gast, known to many as "Dick", was born May 4, 1945, in Bismarck, ND, to Edward and Irene "Susie" (Krause) Gast. He attended Woodrow Wilson Elementary, Ben Franklin Junior High and graduated from Fargo Central with the class of 1963. He furthered his education at NDSU graduating in 1967 with a bachelor's degree in Business Economics. Dick played four years of tennis in both high school and college.

He proudly served his country during the Vietnam War from 1967-1969, spending most of his time on a gun boat along the Mekong River. Following his honorable discharge, Dick pursued his career in banking. On August 15, 1971, Dick was united in marriage to Barbara Jeglum in Grand Forks, ND. Dick worked as a trust officer for Fargo National and later First Interstate. He retired in 2004, as president of Ramsey Bank in Fargo.

During the summer months, Dick and Barb enjoyed spending their summers at their lake home on Two Inlets near Park Rapids, MN. They wintered in either Texas or Florida.

Dick loved the outdoors. He enjoyed hunting, fishing and playing softball. Over the years Dick had many hunting dogs whom he loved dearly. He loved watching NDSU football and basketball and following the Minnesota Twins. Watching hockey was also a favorite, especially when his grandchildren started playing.

A Private Celebration of Life will be held Monday, March 1, 2021, at 2PM in Atonement Lutheran Church, Fargo. To join us via livestream, please follow one of the links at the top of his obituary.

To order memorial trees or send flowers to the family in memory of Richard "Dick" Gast, please visit our flower store.