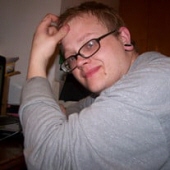 Rangvald Edwin Peterson III, was born July 24, 1986 in Omaha, NE, the son of Rangvald and Amy (Haaland) Peterson Jr. He lived in Omaha until the of age eight when he moved with his family to Fargo, where he attended school. R.E. then worked at Hardees for seven years and McDonald's for seven years before going to work at U.S. Bank, working in their Fraud Department.

On May 1, 2009, he was united in marriage to Jenny Hogfoss. R.E. and Jenny made their home in Fargo.

He was preceded in death by his mother, Amy, in 2009; and his grandparents.

To order memorial trees or send flowers to the family in memory of Rangvald "R.E." Peterson III, please visit our flower store.