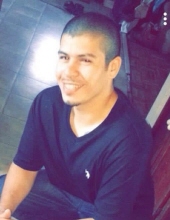 Randy Travis Hernandez was born on November 4, 1989, the son of Antonio and Rosalinda (Flores) Hernandez in Fargo, ND. He was raised in Moorhead and attended school in Moorhead. As a teenager, Randy, helped his father work in the fields in the Moorhead area during the summer.

In 2006, Randy met the mother of his son. They later welcomed Lucas into the world on February 23, 2008, which was the happiest day ever in Randy's life.

He then went to work for Right Screen in Fargo and later worked for Cretex Concrete, working in pre-cast cement for many years. Randy also helped his father Antonio, process metals and enjoyed working and helping his uncle, Louie, on his farm.

During his free time, Randy loved spending time with his family, especially his nieces and nephews. Randy enjoyed family time, and enjoyed family barbecues, family movies, and family outings. Randy especially looked forward to our annual family trips to Park Rapids, MN, on the 4th of July to celebrate with our Park Rapids family.

He was preceded in death by both sets of his grandparents; uncle, Manuel; cousins, Angel Compos, Steven Rendon, and Omar Hernandez.

Randy’s Mass of Christian Burial will be 11:00 AM, Thursday, August 18, 2022, in St. Francis de Sales Catholic Chruch, Moorhead, MN. A visitation for Randy will be one hour prior to the Funeral Mass.

To order memorial trees or send flowers to the family in memory of Randy T. Hernandez, please visit our flower store.