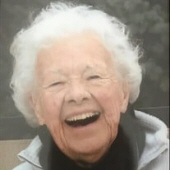 Phyllis was a wonderful mother, wife, friend and daughter. She was passionate about her family and friends, her Christian faith, the arts, French culture, travel and serving her church and community. She had a genuine warmth, an adventurous spirit, an inquisitive mind, a quick wit, an active imagination and a talent for cooking. In short, she was both interested and interesting.

Phyllis Maxine Welch was born on a farm outside of Parkston, SD, on March 29, 1923, to Edward and Olga (Brudvig) Welch. At an early age, her parents divorced and she and her mother moved to Mitchell, SD, where her mother began work as a cook and housekeeper for a prominent couple - Burt and Grace Walrath. Uncle Burt and Auntie Grace were key figures in both the lives of Phyllis and her mother - providing employment and a home during the dark days of the Great Depression, and later making a college education available to Phyllis. She graduated from Mitchell High School in 1941, studied for two years at Dakota Wesleyan University in Mitchell, and transferred to the University of Minnesota in Minneapolis, where she graduated in 1945 with a B.S. in Education. While at the U. of M., she met her future husband, law student Vance Thysell, on a blind date. After graduating, her first job was teaching English, physical education and health in Chaska, MN.

Phyllis and Vance were married in June of 1946 and lived in Minneapolis. After the birth of their first son, Steve, they moved to Vance's hometown, Hawley, MN, where they lived from 1947 to 1953. Vance practiced law in Moorhead, MN, from 1947-1981. During the Hawley years, their children Shelley and John were born and Phyllis' mother (affectionately known as Nana) came to live with the family until she passed away in 1993. In 1953, the family moved to Moorhead and continued to grow; twins Nancy and Brian were born in 1956. Phyllis continued her education and earned a B.S. in French at Moorhead State University in 1967 and lived in Moorhead until 1998. After a wonderful and active life with Phyllis, Vance passed away in 1981. In 1983, Phyllis married long-time family friend, Grant Herreid. They divided their time seasonally among Arizona, Fargo-Moorhead and the family cottage at Big Floyd Lake, near Detroit Lakes, MN. Theirs was often a life of music and travel. Grant passed away in 2004. Phyllis often said how fortunate she felt to have had not just one wonderful husband, but two! In 2013, Phyllis moved to the Stillwater, MN, area to be closer to her family.

Throughout her long and varied life, Phyllis gave back to her church and community. All her memberships on boards, commissions, councils, committees, associations, organizations, task forces, groups and clubs cannot be listed here. The following are some highlights: a founder and past president of the Red River Arts Center (now the Plains Art Museum in Fargo, ND), past member of the Minnesota State Arts Board, past member of KFME Public Television Board of Directors, three committee memberships and a church council membership at Lutheran Church of the Good Shepherd in Moorhead, Minnesota State Senate Candidate, past president of the Moorhead chapter of the American Association of University Women, past vice-president of the Junior League of Fargo-Moorhead and was the 1978 Fargo-Moorhead YWCA Woman of the Year in the Arts.

Phyllis raised five children, encouraged and cultivated the interests and talents of her entire family and celebrated all their accomplishments. She had a unique ability to connect with others and discover their individuality, resulting in friendships far and wide. She was dearly loved by family and friends. It was not unusual for family members to hear what a wonderful mother, mother-in-law, or grandmother they had - reaffirming that her presence in their lives was a lifelong gift to them. Phyllis will be greatly missed and always remembered.

Memorials may be made to the Plains Art Museum - Phyllis Thysell Education Fund, Fargo, or Lutheran Church of the Good Shepherd, Moorhead.

A memorial service will be held on Friday, August 16, 2019, at 11 AM in Lutheran Church of the Good Shepherd, Moorhead.

To order memorial trees or send flowers to the family in memory of Phyllis M. Thysell, please visit our flower store.