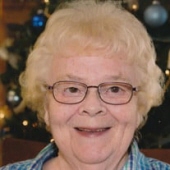 Phyllis Darlene Guttormson was born August 26, 1940, near Ulen, MN, to Orris and Lila (Green) Knutson. She was raised in that area and graduated from Ulen High School in 1958.

Phyllis moved to the Fargo-Moorhead area and worked in food service for many area businesses. She earned a degree as a Medical Secretary from Moorhead Technical College. Phyllis married Orland Swenson in 1961 and then later married Gene Guttormson in 1972.

Visitation for Phyllis will begin at 1 PM, with a funeral at 2 PM, Sunday, January 26, 2020, in Korsmo Funeral Chapel, Moorhead.

To order memorial trees or send flowers to the family in memory of Phyllis Guttormson, please visit our flower store.