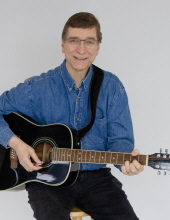 On Wednesday, October 19, 2022, Phil Peterson, loving husband, father and grandpa, passed away in Sanford Hospice House, Fargo, ND, at the age of 70, after a ten-year struggle with Multiple Myeloma.

Phil attended Mandan schools and graduated from Mandan High School in 1970. He graduated from Dickinson State College and studied English, Speech and Theatre.

In the fall of 1972, Phil met a young music major at DSC, Bonnie Smokov, a farm girl from Steele, ND, After a whirlwind college courtship, they were married on August 25, 1973, and moved into married student housing. Their marriage was said to have united the Theatre and Music departments at DSC for the first time, ending a longtime rivalry and struggle for the use of the DSC stage.

Phil’s first career after graduation was as an English and Theatre teacher at Dawson County High School in Glendive, MT. After two years of teaching, the Petersons moved back to Mandan where, in 1976, Phil was called by his home congregation, First Lutheran, to serve as their first Youth and Education director. He continued that career path until 1993, serving at First Lutheran in Mandan, ND, Zion Lutheran in Rockford, IL, and First Lutheran in Fargo.

In 1977, Phil and Bonnie were blessed with a daughter, Amber. In 1980, their first son, Aaron, was born and in 1982, Adam completed the team. Phil tried to be a hands-on dad and the family often accompanied him to church or camp for the many youth activities that Phil was in charge of.

Rockford, IL, became their next home in 1985, as Phil pursued a Masters Degree in School Counseling while also working at Zion Lutheran Church for four years. He enjoyed taking Bonnie and the kids into Chicago,IL, Milwaukee, WI, and Madison, WI, for family field trips.

In 1989, the family moved back to North Dakota to be closer to their parents and Phil accepted a call to First Lutheran Church in Fargo where he served for four years.

Phil was a “techie” and was an early adopter of computers. He served as his own “secretary” at the churches where he worked which led to his career in the world of publishing later on. Phil happily spent ten years as the back shop manager with many kind and talented coworkers at the Midweek in West Fargo, ND. Working there gave him valuable experience in management which led to him launching his own business.

Phil began Peterson Productions in 2005, and worked from home. He did various and interesting desktop publishing projects through the years, which eventually led to making photo slideshows. Phil contracted with area funeral homes to create meaningful memorial videos. While working on videos, he met with the grieving families and listened to their precious stories so that he could comfort them and make the tributes as personal as possible.

In 2017, Phil took his son, Adam, into the business and together they expanded into more esoteric services. They began to specialize in media transfers. Bonnie said that they had built the “F-M Museum of Antique A-V Equipment” because Phil had accumulated so many old pieces of equipment in order to do transfers from old formats to the latest technology.

Phil loved music. He played clarinet and bass clarinet in high school and “contracted the guitar bug” in college. He sang and played for Christian coffeehouses and student worship groups in those early years. Phil always said that he didn’t have the best voice but he wasn’t afraid to sing out while playing the guitar with gusto to lead others in praise.

He loved Jesus, Bonnie and the kids, the dog, good friends, traveling, TV and movies, books, his recliner and remote, and PIZZA!

He didn’t like “vege-terribles”, people who didn’t do their job, and itchy clothing. Phil was always noticing things that needed fixing in the world around him. Bonnie said, “Write a book and call it “Phixing the World with Phil.”

Another thing Phil liked was a good joke and he had a sense of humor and fun. He enjoyed the times when Bonnie would say, “Let’s plan a party!” and Phil created lots of fun and crazy elements for their celebrations with family and friends over the years.

Bonnie talked Phil into adopting dogs early on but it seemed that many were neurotic rescue dogs. It wasn’t until Frampton, the miniature poodle with an attitude, joined them in 2012 that Phil finally got a dog that really liked HIM! They were a good pair as “Framp” kept Phil company in his home office while Bonnie was at work.

He made the most of his last ten years and enjoyed adventures and travels with Bonnie after she retired. Phil was a fun-loving Boppa to their two grandsons and loved finding special toys for them. He knew that meant that he could play, too!

Above all, Phil was a man of faith. He came to his spiritual “AHA” moment in college and committed his life to the Lord. He tried to use his gifts to glorify God and serve others. Phil was courageous and good-humored about “living with cancer”, not just dying from it.

Picture a tall, lanky guy who was always on the move to get the job done; that was Phil. When he was diagnosed, Bonnie told him to please not be in a hurry to die and he wasn’t. Phil never feared dying and knew exactly where he was going…to be with his Lord in Heaven. He led a good life and was blessed by God in so many ways, so Phil tried hard to be a blessing to others, too.

Phil is survived by his wife, Bonnie; his children, Amber of Plymouth, MN, Aaron of Missoula , MT and Adam of Fargo; grandsons, Jeremy and Spencer; his brother, Ron ( and Mary Beth) Peterson of Denver, CO; and numerous cousins, in-laws, nieces and nephews.

He was preceded in death by his parents, Tug and Lorene; and his oldest brother, Larry Peterson.

A visitation time will be held at Korsmo Funeral and Cremation Service in Moorhead, MN, on Sunday, October 23, from 5 – 7 PM, with a time of sharing at 6:30 PM.

Phil’s celebration of life service will be on Monday, October 24, 2022, at Triumph Lutheran Brethren Church, West Fargo, ND, at 11 AM with a pizza lunch to follow, as per Phil’s request!

To order memorial trees or send flowers to the family in memory of Philip "Phil" Peterson, please visit our flower store.