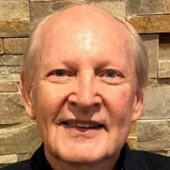 Peter N. Westrum, 77, of Fishers, Indiana, passed away on Wednesday, January 15, 2020 at Hamilton Trace of Fishers. He was born on October 23, 1942 to Lloyd and Gladys (Eastland) Westrum in Clearbrook, Minnesota.

Peter was a man of faith who loved the Lord. He served with the Peace Corp in the Philippines and then enjoyed teaching English in Malaysia, where he and Sue got married. Together, they joined Wycliffe Bible Translators, pioneering work in Indonesia as linguists and translators. They retired after serving with Wycliffe for over 45 years. Peter enjoyed socializing and playing games, like croquet and interactive word games, and could often be found encouraging others.

In addition to his parents, he was preceded in death by his wife of 50 years, Susan (Palmer) Westrum.

Memorial contributions may be made to Wycliffe Bible Translators, PO Box 628200, Orlando, FL 32862.

To order memorial trees or send flowers to the family in memory of Peter Westrum, please visit our flower store.