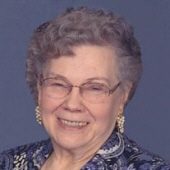 To view Pearlene's service by livestream, please follow the link below: https://portal.midweststreams.com/services/watch/D6KG62W66A

Pearlene Joyce Anderson was born April 14, 1933, near Nome, ND, one of 12 children to James O. and Carla (Strand) Anderson. She was raised and educated near Valley City, ND. When Pearlene was 13, she lived with and worked for several farm families in the Valley City area. On November 25, 1951, Pearlene was united in marriage to Vernon Vosburg in Webster, SD. Following marriage, they lived in Ransom County, working for area farmers before moving to Fargo.

Pearlene was a busy Mom tending to her eight children at home. She loved to read and enjoyed learning along the way. In the summers she tended to her large garden of produce and also planned and supervised their several home remodeling projects over the years. Pearlene was an artist at heart. She was incredibly talented with crafts, from ceramics to painting. She made many projects during this time which will be treasured family pieces for years to come. She also enjoyed knitting, crocheting, and was an excellent seamstress.

Pearlene was a lifelong caregiver, which carried into her next role once her kids were on their own. Pearlene worked for Easterseals and Hospice of the Red River Valley, providing care for children with special needs and adults during their last days.

She was preceded in death by her parents; husband, Vernon; two brothers, Dale Anderson and infant brother Donald Anderson.

A private family service will be held Saturday, February 27, 2021, in Korsmo Funeral Chapel, Moorhead. Pearlene's service will be livestreamed by follow the link below. https://portal.midweststreams.com/services/watch/D6KG62W66A

To order memorial trees or send flowers to the family in memory of Pearlene J. Vosburg, please visit our flower store.