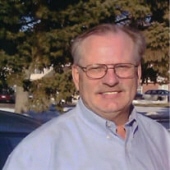 Frederick E. Crowell, 67, Detroit Lakes, MN, passed away peacefully surrounded by his loving family, Wednesday, October 28, 2020, in Ecumen-Emmanuel Nursing Home, Detroit Lakes following a brave battle with ALS.
Frederick "Fred" Eli Crowell was born December 15, 1952, one of nine children to Mary (Sergent) and Gordon Crowell in Hibbing, MN. He spent his early years living in Becker County and Hibbing. At the age of 10, along with his parents and six of his brothers and sisters, moved to St. Paul, MN.

Fred attended The Seventh Day Adventist Capital City Junior Academy in St. Paul, MN, through 8th grade, then attended Mechanic Arts High School, graduating in 1970. While in high school, he lettered in track, was in wrestling, band, the Mechanic Arts letter club and Honor Seminar to Academic Achievement. He graduated from the Seventh Day Adventist Union College in Lincoln, NE, in 1977. It was at Union College that Fred met his future wife, Roberta Nelson. They were united in marriage December 12, 1971, in Kearney, NE. For a short time, they lived in Nebraska where Fred worked as a carpenter before moving to Denver, CO.

In the summer of 1971, he received his military draft notice and was drafted in June of 1972. He entered the service as a conscientious objector and became a medical corpsman. He completed his basic and advanced training in Texas before being sent to Ft. Detrick in Frederick, MD. While in Ft. Detrick, his duties were working with the Seventh Day Adventist's, "Project White Coat," a program that the church has with the Army. He was assigned to help research and discover antibodies for infectious diseases.

It was in Maryland that he heard God's calling him to the ministry. In August of 1974, he returned to Union College to pursue a degree in Theology and graduated with a bachelor's in theology in 1977. Fred went on to seminary at Andrews University in Berrien Springs, MI. He served as an intern pastor for the Missouri conference until 1982 before returning to the seminary where he received his Master of Divinity in 1984. During his ministry he preached over 2,000 sermons and was the ministerial director for the Northern Minnesota Seventh Day Adventist Pastors. He served as the assistant director for Adventist disaster response for the North American division. He was director of the SDA Community Services for the Iowa/Missouri Conference and was chaplain for the West Des Moines Police Department in Des Moines, IA. During his ministry he went to Cuba on a mission trip and to Africa for Evangelistic meetings.

He always considered it a "hobby" to help people and do whatever he could to make life easier for them. He was a bicycler and runner. In 1999, Fred ran the Twin Cities Marathon. He also loved to travel, adventuring to all 50 states. He enjoyed spending time with his family and friends and working on projects around his home. He was immensely proud of his granddaughter, daughters and son-in-law.

He always enjoyed Christmas and often said it brought very pleasant memories for him of family gathering, laughing, eating and enjoying each other's company. He always cherished the opportunity of reading the Christmas story each season.

Fred will be deeply missed by his wife, Roberta of Detroit Lakes; two daughters, Kelli and Amy (Tyler) Bower; and his granddaughter, Ashley Bower. He is also survived by his sisters, Wanda (Gary) Green, Laura (Don) Fjeld, Cheryle Rude; and brothers, Walter Crowell and Tom (Bertha) Crowell; along with many nieces and nephews.
He was preceded in death by his parents; one sister, Leona Stephenson; two brothers, Jim Crowell and Lowell Crowell; and two nephews.


Memorial Service for Fred will be held Monday, May 31, 2021 at 3PM in Seventh Day Adventist Church, Detroit Lakes, MN.

To order memorial trees or send flowers to the family in memory of Pastor Frederick "Fred" Crowell, please visit our flower store.