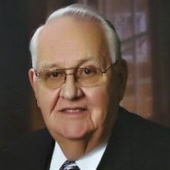 Oscar "Oak" Bergos, the son of Oscar and Selma (Sylvester) Bergos, was born August 25, 1931, in Crookston, MN. He graduated from Crookston Central High School in 1949. He then went on to the University of North Dakota (Grand Forks) where he received a BA and MA in Education in 1959. While attending college, he was active in several musical groups and was particularly proud of having been a founder of the Varsity Bards, a UND performing group, and Sigma Nu Fraternity President

Oak served his country during the Korean War (1954-1955) as a First Lieutenant in the United States Air Force. He was a Station Commander of the Armed Forces Korea Network radio station.

On May 24th, 1959, Oak married Marlys Boe, in Viking, MN. Together they raised 5 children - Nancy, Gary, Mary, Jane and Brian. Early in his career, he worked as a Business teacher at Technical Institutes in Thief River Falls, MN, and Willmar, MN. In 1965, Oak accepted a position as the first Director of the Moorhead Area Vocational-Technical Institute where he was charged with building the school from the ground up (selecting location, purchasing land, supervising the build, hiring staff, selecting curriculum, and facility expansion in later years). He was Director for 22 years until he retired in 1987.

Oak was a strong leader who was extremely active in the community. He was a member of the Moorhead Blue Line Club, serving as president during the effort to pass a bond issue for the Sports Center. As a charter member of the Vikingland Kiwanis Club, Oscar held several offices including President from 1982-1983, and Lt. Governor of District 14 of the MN-Dak District from 1993-1994. He was a member of the Minnesota Technical Directors Association and served as President from 1975-76. He later became Chairman of the Retired Technical Institute Directors Association. As an active member of The Lutheran Church of Christ the King, he served two terms on the church council, sang in the worship choir and served as Chairman of the Men's Club annual Harvest Dinner for over 20 years. His charity work included volunteering with Churches United for the Homeless and Habitat for Humanity.

Oak loved to tell stories and was always ready with a good joke. He enjoyed traveling and exploring new places, taking the family on memorable trips throughout the U.S. and Canada. As an avid fisherman, he liked to visit fishing spots in northern Canada and Alaska. Oak loved spending time at the family vacation lake house, building and making things with his hands, and playing the ukulele. He was an enthusiastic sports fan who enjoyed watching games on TV.

Oak will be dearly missed by his family, friends and community.

He was preceded in death by his parents, Oscar and Selma Bergos; four sisters, Lucille, Arlene, Winona, and Loretta; and daughter, Nancy Bergos Owens (Ralph).

In lieu of flowers, memorial donations may be made to The Lutheran Church of Christ the King Memorial Endowment.

The family extends their gratitude to the staff at Sanford Hospital for their support and care in Oscar's final days.

To order memorial trees or send flowers to the family in memory of Oscar "Oak" Bergos, please visit our flower store.