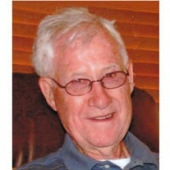 Orval Seldon McGregor was born May 16, 1921, the son of Russel and Alice (Johnson) McGregor, in Oxbow, Saskatchewan, Canada. He was raised and educated there until the death of his mother. It was at that time, Orval moved to Redwood Falls, MN, with his father, twin brother, Norval, brother, Gordon, and sister, Alene, where he worked in various jobs.

On December 18, 1941, he was united in marriage to Eleanora Hanson in Redwood Falls. He then entered the United States Navy, serving during World War II. After his discharge, Orval and Eleanora moved to Moorhead where they made their home and raised three children, Lowell, Sandra and Steven. Upon moving to Moorhead, he went to work for Armour Packing Plant for eight years, before beginning his thirty-one year career driving a truck route for Manchester Biscuit Company (Now Keebler). Eleanora died on October 14, 2006, and in 2013 he moved into Bethany Homes.

Orval enjoyed fishing, gardening, traveling and working in his garage on many projects. He also loved spending time with his family, especially his grandchildren who always made him smile.

A visitation for Orval will be one hour prior his funeral service.

His Funeral Service will be Tuesday, February 7, 2017, at 1 PM, in Korsmo Funeral Chapel, Moorhead.

Burial will be in Moorhead Memorial Gardens, Moorhead

To order memorial trees or send flowers to the family in memory of Orval McGregor, please visit our flower store.