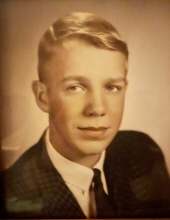 Nathan Eugene Mosher, 79, of Moorhead, MN, passed away at his home on Saturday, October 1, 2022, after a series of illnesses including several minor strokes. Nathan Mosher was born in Crookston, MN, on April 17, 1943, to Daniel Robert “DR” and Carola (Balstad) Mosher. He grew up on the family farm near Beltrami, MN. He graduated from Fertile-Beltrami High School in 1961.

After high school graduation, Nathan joined the United States Army, serving two years at Fort Sill, OK. He was proud to have served his country and to be a veteran. After being honorably discharged from the Army he moved to Moorhead. Nathan’s next four years were spent earning a Bachelor’s degree at Moorhead State University. Here he studied and received his degree in secondary education. Also, over these years at Moorhead State University, Nathan worked for a campus painting group. He learned this trade especially well and chose it as his life-long career.

He was a bachelor, but that did not keep him from having a strong interest in the lives of young people, including many of his nieces and nephews. He attended their sporting events and academic programs, shared their joys as they took their first jobs, were married, met the challenges of child raising and more.

Nathan was a generous giver among family, neighbors in his Lamb Park neighborhood, and friends. He was a farmer at heart, raising a hearty vegetable garden and sharing the produce with the Dorothy Day Food Pantry and others.

He enjoyed reading and learning. He was a reader, especially in the areas of history and current local, national and international news. He used television, radio, and the newspaper as his resources. His memory for names and recall of detail were most helpful to him as he shared ideas in conversations.

A favorite pastime for Nathan was to challenge others to a contest of cutting a full deck of cards in half with one twist of his wrists.

Nathan was most generous with his time. For example, he provided help for an elderly Kragnes, MN, couple by assisting them with driving to Moorhead for shopping, pie and coffee, doctor’s appointments and traveling to Hawley, MN, to buy lefse. They also worked together in gardening and harvesting the garden. Theirs was a friendship that lasted for years.

Visitation for Nathan will begin at 10 AM, with a Celebration of Life service at 11 AM, Monday, October 17, 2022, in Trinity Lutheran Church, Beltrami, MN. Burial, with full military honors will be held in Fairview Cemetery, Beltrami.

To order memorial trees or send flowers to the family in memory of Nathan "Nate" Mosher, please visit our flower store.