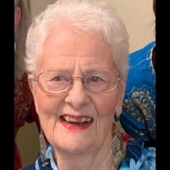 Nadine Carlson, 96, Moorhead, MN, died Wednesday, April 28, 2021, in her daughter's home in Moorhead, surrounded by her family and under the care of Hospice of the Red River Valley.

Nadine Stenshoel was born on January 24, 1925 in Crookston, MN to Nels Peter and Marit (Jorgenson) Stenshoel, the youngest in a family of 8. Her father was a funeral director, and her mother was a nurse, a graduate of Bethesda School of Nursing in Crookston. Nadine's given name was Ardith Nadine, which was quickly shortened to just "Nadine".

Nadine attended Crookston High School, leaving early to attend Concordia College, Moorhead. She attended year around, part of the year at Concordia and part of each year at Fairview Hospital School of Nursing, Minneapolis, MN. She was a member of the U.S. Cadet Nurse Corps, a program that helped to supply nurses for the nation's hospitals as many nurses attended to the wounded during World War II. She received her diploma from Fairview in 1946. She was one of the early "degree" nurses, graduating from Concordia with a B.A. in 1947.

The summer after graduating, she was a tour guide and nurse for a bus tour of the national parks. She taught nursing at Deaconess Hospital in Chicago, IL, Fairview Hospital in Minneapolis, and later, while living in Fisher and Twin Valley, MN, she taught for many years at Agassiz Valley School of Practical Nursing in Crookston. Teaching nursing was her passion! She also worked in other nursing positions, including at the Lutheran Sunset Home in Grafton, ND and she finished her nursing career as a school nurse in Twin Valley. In her retirement, she volunteered as a Bible camp nurse and helped teach CPR. A lifelong learner, she kept up her CEUs for her nursing license for many years after retiring. She was privileged to have several of her former nursing students care for her in her later years.

Nadine married Arne Richard Carlson on August 29, 1950, at Our Savior's Lutheran Church in Crookston. They were blessed with four children, Reed, Terryl, Miriam and Kurt, and later with six grandchildren and seven great-grandchildren.

When she accepted Arne's proposal of marriage, she also accepted the call to be a pastor's wife. Together they ministered in small town and rural parishes in Black River Falls, WI, 1952-1956 (Little Norway and Squaw Creek), LaMoure, ND, 1956-1960 (Zoar, St Ansgar's and Marion Lutheran), and Park River, ND, 1960-1967 (Our Saviour's, Pleasant Valley and Golden Valley) and Fisher, MN, 1967-1981 (Fisher and Bygland Lutheran) and in Twin Valley, MN 1981-1987 for his last call as Chaplain to the Twin Valley and Halstad, MN, nursing homes. She loved the people of the parishes they served, entering into the life of the churches and communities they lived in.

In 1960, Arne and Nadine built a cabin at Kabekona Lake, where they have worked and played together as a family, building life-long friendships with their neighbors, and entertaining family and friends from near and far. She was always ready to have fun ¬ laughing, singing, playing games, putting on skits, and reading aloud her humorous poems.

In their retirement years, they enjoyed two winters with sons, Reed and Kurt, and their families in Leavenworth, WA. They eventually bought a house in Sun City, AZ, where they wintered for many years, making many dear friends and always returning for summers at Kabekona Lake with family and friends. In their later years, they wintered in Fargo-Moorhead to be closer to family.

Nadine's love of music expressed itself in many ways. She directed choirs over the years, including at the schools of nursing and many of the churches where they served. She attended several of Paul J. Christianson Choral Schools. In her retirement years, she picked up the bassoon again, taking bassoon lessons, and playing in several bands including the Golden Notes bands in Sun City and Fargo, and the Park Rapids (MN) Area Community Band. She had always enjoyed jazz music and even played a little "skat" on her bassoon. She sang with the Kabekona Singers for many years.

Nadine valued her Norwegian heritage. Her mother Marit's family emigrated from Sunndal, Norway, homesteading in Gary, MN. Her father Nels' family came from Eidsvoll, Norway, via Fillmore County, MN. She took Norwegian at the Sons of Norway, and in her latter years, many Norwegian phrases broke spontaneously from her lips! Nadine visited Norway in 1984 and again in 1999 with her brother, Myles, and his family. Her Norwegian roots were evidenced in her many interests, be it dyeing her own wool, playing Grieg on the pump organ or working with Arne to perfect their "Quintessential Lefse" recipe.

She was not afraid to tackle difficulties, encouraging others with "let's make the best of the situation" and "we can make mistakes awfully easily, but we can also overcome them."

A Memorial Service for Nadine will be held Saturday, July 24, 2021, at 11 AM at Trinity Lutheran Church, Laporte, MN. Interment will be at Lakeport Cemetery, Laporte.

To order memorial trees or send flowers to the family in memory of Nadine Carlson, please visit our flower store.