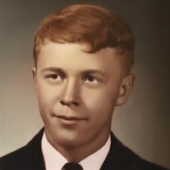 To view the recording of Myron's service please click the following link: https://portal.midweststreams.com/services/iframe/25387

Myron Douglas Stern, 69, of Fargo, ND, passed away on Wednesday, October 27, 2021, in Sanford Medical Center, Fargo.
Myron was born on February 10, 1952, to Christ and Gertrude (Finck) Stern, in Richardton, ND. Myron went to school and graduated from Lake Park (MN) High School. Myron was big into sports in high school, specifically wrestling. He even made it to the state wrestling championship.
Myron grew up surrounded by a large family with seven brothers and sisters. All of whom have many fond memories of him. One of those memories was of him selling the Grit Newspaper, which led to him being known as the Grit Man. As Myron got older, he grew to love playing whist, and spending time visiting with people. He also spent many years as a farm hand for Bob Anderson and held many other various jobs. On January 24, 1985, Myron was united in marriage with Jean Henning, in Fergus Falls, MN. They spent 28 years of marriage together before Jean's passing in 2013.
Myron was preceded in death by his wife, Jean; parents, Christ and Gertrude; and brother, Michael. He is survived by his siblings, Pete (Karen), Paul (Karen), Marion Stern, Vernon (Glenda) ,Joseph (Duapen), and Julie (Tony) Paul; and many nieces and nephews; sisters-in-law, Sharon Stern, Ann Weiler, Carol Frisby.
Myron's life celebration service will be held on Monday, November 1, 2021, at 11 AM, in Korsmo Funeral Chapel, Moorhead, MN. Burial will take place following the service in Houglum Cemetery, Lake Park, MN.
Memorials preferred to Houglum Cemetery, Lake Park, MN.

To order memorial trees or send flowers to the family in memory of Myron D. Stern, please visit our flower store.