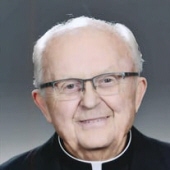 Msgr. Donald Krebs, 89, of Moorhead, MN, died Wednesday, September 11, 2019, in Essentia Health, Fargo, ND. He was preceded in death by his parents and a sister, Dorothy (Krebs) Greene.

After nine years at the Cathedral Parish in Crookston, and teaching religion, music and social studies in Cathedral High School, Father Krebs served parishes in Middle River, Strandquist, East Grand Forks, and Fisher, all Minnesota. He completed his M.A. in Theology at St. John's University in 1971. He served at St. Joseph Parish in Moorhead from 1977 to 1981, and later from 1991 until 1999. While pastor of St. Joseph's, he substituted as instructor in the religion department at Concordia College, and did adult education in diocesan parishes.

Being active in the continuing education of priests led him to serve as spiritual director for many priests' retreats in dioceses of the United States, as well as retreats for seminarians and congregations of religious sisters. While pastor of the Crookston Cathedral Parish, 1981 to 1991, Father Krebs led in the acquiring for the parish of the Mount St. Benedict School building and in the construction of the new Cathedral Complex. He was named an honorary monsignor by the Church in 1990.

One year after retiring as pastor of St. Joseph's in Moorhead in July of 1999, he began teaching in the formation faculty at Sacred Heart School of Theology in Milwaukee, WI, until retiring in 2008. Subsequently he provided sacramental ministry to parishes of the Dioceses of Crookston and Brownsville, Texas.

Memorials are preferred to St. Joseph's Parish and School, Moorhead.

To order memorial trees or send flowers to the family in memory of Msgr. Donald H. Krebs, please visit our flower store.