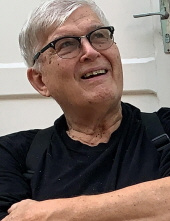 To view Milton's Funeral Service via livestream, please click on his Tribute Wall and "Live Webcast"

On May 11, 1974, Milton was united in marriage to Barbara “Barbie” Bredeson and welcomed a daughter, Molly in 1981. Through the years, they provided a welcoming home to high school exchange students from around the world.

Milton delighted in the form and beauty of objects, images, and the built environment. Alongside his architectural practice in Fargo, ND, Bainbridge Island, WA, and Bemidji, MN, he designed and built guitars, made drawings and watercolor sketches, created graphic design projects and paintings, along with producing digital drawings that brightened the social media feeds of family, friends, and admirers far and wide.

Milton loved attending art exhibitions, connecting with people, cooking, playing guitar, learning new things, and embarking on all sorts of projects. Until the time of his passing, Milton was an inspiring and encouraging educator, who brought enthusiasm and warmth to his students and colleagues at the Department of Architecture at NDSU. He was filled with ideas and creative energy, and was a generous, kind soul, with an extraordinary sense of humor and zest for life.

He was preceded in death by his parents, Stewart and Mildred.

Visitation for Milton will be held Tuesday, September 6, 2022 in Korsmo Funeral Chapel from 5pm-7pm.  Funeral Service will be Wednesday, September 7, 2022 at 11am in Concordia College - Knutson Center Centrum, Moorhead.

Interment will be in Immanuel Lutheran Cemetery, McIntosh, MN. Arrival time for burial will be 3:30pm.

To order memorial trees or send flowers to the family in memory of Milton S. Yergens, please visit our flower store.