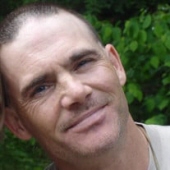 Michel Boswell was born April 27, 1968, the son of Helmer H. and Ruth (Kent) Boswell, in Mahnomen, MN. He was raised in Ebro, MN, and attended school in Bagley, MN. Over the years, Michel lived in the Mahnomen, Ebro, Bemidji, and Bawabik, MN, areas. In 2003, he moved to Moorhead where he has since made his home.

Michel enjoyed traveling and accomplished his fondest dream by visiting Alcatraz. He also enjoyed sports, playing pool and softball, and was always up for a game of cribbage. Michel loved people, he always enjoyed his visits, especially to Medical Pharmacy. Over the years he was a very strong supporter of his family.

He was preceded in death by his father and mother; grandparents and stepgrandmother.

A Visitation for Michel will be one hour prior to the service.

There will be a second service in Mahnomen, MN, in the spring at the time of Michel's burial.

To order memorial trees or send flowers to the family in memory of Michel Boswell, please visit our flower store.