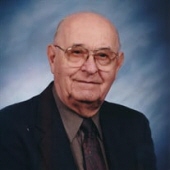 Melvin, the son of Alex and Lydia (Roth) Buck, was born in Napoleon, ND, on April 18, 1921. He grew up in Napoleon and received his education in Streeter, ND, where he graduated from high school in 1940. He attended Ellendale (ND) Normal School, Stout University, Menominee, WI, and University of Minnesota, Minneapolis, MN.

On March 28, 1943, Melvin married Edna Gunther in Ellendale. After Mel's graduation, they moved to Redfield, SD, where he taught school and later to Huron, SD. They later moved to Aberdeen, SD, where Mel taught for close to 40 years, as a vocational education teacher in the high school and as superintendent of the vocational school.

After Mel retired in 1981, the couple moved to Bloomington, MN. Eight years ago, Edna and Melvin moved to Fargo, ND. In August of 2016, Melvin became a resident of Elim Rehab and Care Center, where Melvin died on Wednesday, November 7, 2018, at the age of 97.
Mel is survived by his wife, Edna, Fargo; son, Wayne (Sherryl) Buck, Sheridan, WY; daughter, Linda (Meryl) Valnes, Durham, NC; three grandchildren, Kevin (Brianna) Buck, Sandy (Cory) Quammen, and Matthew Valnes; and great-grandchildren, Morrigan Buck and Linnea and Elise Quammen. Mel was preceded in death by a grandson, Jason Buck, who died in 2013; his parents; a brother, Arnie; and four sisters, Rita, Clara, Adeline and Lorraine.

Mel's funeral service will be on Monday, November 12, 2018, at 2:30 PM, in Bethel Evangelical Free Church, Fargo. Visitation will be one hour prior to the funeral. Mel will be buried on Tuesday, in Dawn Valley Memorial Park, Bloomington.

To order memorial trees or send flowers to the family in memory of Melvin R. Buck, please visit our flower store.