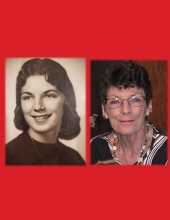 Mavis married Darl “DW” Oien in 1960, they moved to Grand Forks, ND, and had a son, Wayne N. Oien. In 1965, Mavis moved to the Twin Cities and worked in finance, where she met and was married to Marvin Jones in 1968. Mavis moved to north Fargo in 1975 and worked at Northland Educators Credit Union at the NDSU campus. She later worked at Fargo Assembly. Mavis married Ron Iverson in 1989, and then worked at Stop-N-Go before retiring.

Mavis loved square dancing for many years with her husband, Ron. She was devoted to her Alcoholics Anonymous family and very proud of her nearly 46 years of sobriety. Mavis was a staunch supporter of Veterans' programs and had served in the American Legion Auxiliary. Mavis was a faithful volunteer at the Moorhead Health and Rehab gift-shop and served as the secretary of her condo association for many years. She loved her family immensely, especially appreciating her “Sisters Coffee Group,” which met weekly with their "5th sister," Linda Koester. Mavis passed away peacefully in her home on April 5, 2022.

She was preceded in death by her parents; her three ex-husbands; and her brother-in-law, William “Bill" Ziegler.

The family says “Thank You" to Ethos Hospice for their diligent and loving care these past three months. To the staff of Home Instead the last 12 days, and to the residents of Mavis’ condo association for their genuine understanding, concern, care, and assistance the last two years.

Additionally, the family would like to publicly express their deepest gratitude to Mavis' niece, Jennifer (Ziegler) Dahnke of Kragnes, MN, for her incredible and extensive support via her fervent availability for Mavis’ numerous medical appointments, special care and wise advice over the last two years.

Visitation will begin at 1 PM, followed by a Life Celebration service at 2 PM, Sunday, April 10, 2022, in Korsmo Funeral Chapel, Moorhead. There will be a time for gathering and refreshments immediately afterwards.

To order memorial trees or send flowers to the family in memory of Mavis Fahrlander Jones, please visit our flower store.