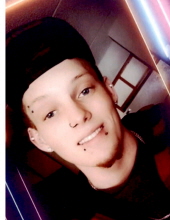 Matthew Scott Ward, the son of Randy Ward and Vickie Dronen and younger brother of Taz and Anthony Ward, was born in Fargo, ND, on March 6th, 1996. He was baptized at First Assembly of God Church in Fargo. He grew up receiving his education at Fargo South High School.

After school Matthew held various jobs working in the hospitality and construction industries.

He loved his family, especially his nephews. He was a kind person giving you the shirt off his back even if that’s all he had. He was always putting others before himself. Matthew also had a passion for music. He would listen to a beat of a song and write/sing his own lyrics. Singing provided an emotional release, a way for Matthew to express his thoughts and feelings. Often he sang about struggles and pain not only he experienced, but everyone endured through life. He often sang of his love for his family and dreams he had.

He was preceded in death by his mother, Vickie Dronen; grandparents, Dwayne and Lillian Dronen, Rex and Wanita Ward.

To order memorial trees or send flowers to the family in memory of Matthew S. Ward, please visit our flower store.