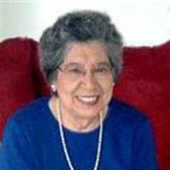 Mary Louise (Cruz) Finger was born on June 21, 1930, in Moorhead, MN, to Canuto and Andrea Cruz. She married Reuben Finger on March 2, 1957, in St. Joseph Catholic Church. During their time in Moorhead, they had two daughters, Cindy and Loretta. In 1967, the family moved to Texas, where their third child, Greg, was born. In 1993, after Reuben's retirement, they moved to Kasson, MN. Throughout the years, Mary remained a very devoted wife, mother, and grandmother. She enjoyed arts and crafts, baking, and spending time with her grandchildren, Billy, Kelli, Gabby and Becky.

After a brave battle with cancer, Mary died peacefully on Friday, August 7, 2015, at 85 years of age, surrounded by her family.

Mary is survived by her husband, Reuben; daughters, Cindy (John) of Atlanta, GA, and Loretta (David) of Vienna, VA; son, Greg of Kasson; and four grandchildren, Billy of San Jose, CA, Kelli of Birmingham, AL, and Gabby and Becky of Vienna.

Mary was preceded in death by both parents, six brothers and three sisters.

To order memorial trees or send flowers to the family in memory of Mary Finger, please visit our flower store.