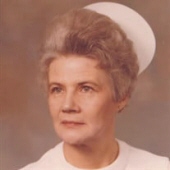 Marjorie Yvonne McAllister, 95, Moorhead, MN, passed away on Wednesday, June 24, 2020, in her home, surrounded by family.

Marjorie was born in St. Paul, MN, on April 19, 1925. She was kept in an orphanage until she was adopted by Oscar and Hermana (Skalet) Alme from Averill, MN. She lived in Averill until 1934 when the family moved to Moorhead. Marjorie graduated from Moorhead Senior High School in 1943. She graduated from St. Luke's School of Nursing in 1946, receiving her diploma. Marjorie became a registered nurse and was preparing to help in World War II. The war ended before she was able to join as a nurse.

In September of 1946, Marjorie married Richard McAllister. Together they had two sons, Richard Paul and Miles Rand. At 52 years of age Marjorie's husband, Richard, passed away from heart complications. She continued to live in Moorhead.

Marjorie is survived by her two sons, Richard Paul and Miles Rand (Jennifer) and one grandchild. She was preceded in death by her husband, Richard and her parents, Oscar and Hermana.

No public services are planned for Marjorie at this time.

Burial will be at Riverside Cemetery, Moorhead.