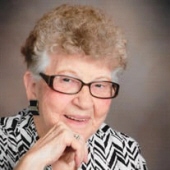 Marjorie was born September 18, 1925, in Ada, MN, the daughter of Millard and Ida (Hanson) Smith. She lived with her family in rural Gary, MN, and later Ada, and graduated from Ada High School. Margie's siblings called her "Dolly" and classmates called her "Smitty."

After high school, Margie worked at the pharmacy in Ada and later moved to Seattle, WA, to work on the assembly line at Boeing during World War II. Boeing produced 98,965 aircraft during WW II. Margie moved back to Ada and was united in marriage to Warren Robert Kroshus on July 3, 1946. Together they farmed in the Perley, MN, area of Norman County, where they raised sugar beets, small grains, and soybeans. At various times they also had white faced Herefords, sheep, pigs, chickens, and a Shetland pony. The farm was a century farm and had been in the Kroshus family for more than 100 years. Margie loved the farm and after she moved into town, she always found great joy in taking a ride out to see the farm and spend some time in the farmhouse. "That's where all the memories are," she would say.

She took great pride in being a mother, homemaker, and farm wife. Margie was a long-time member of Bethania Lutheran Church in Lee Township and later Winchester Lutheran Church in Borup, MN. She was an active member of Ladies Aid and her Homemakers group where she had many dear and lifelong friends. Warren "Bob" died in 1998, when they were in a severe car accident.

Margie's family would like to express their sincere appreciation to the wonderful staff and caretakers at the former Eventide Fairmont, The Linden and BeeHive Homes Assisted Living in Moorhead. The loving and gentle care given our mother in the last months of her life will never be forgotten.

Visitation for Margie will begin at 12 PM, with a funeral at 1 PM, Wednesday, December 29, 2021, in Winchester Lutheran Church, Borup.

To order memorial trees or send flowers to the family in memory of Marjorie Kroshus, please visit our flower store.