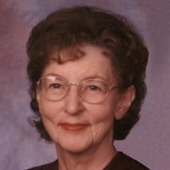 Marilyn Claire Lenzmeier departed this world and entered Heaven on February 29, 2020.
Marilyn Claire Wellan was born May 23, 1932, in Napoleon, ND, to Walter and Lydia (Krueger) Wellan. During her high school years, her family moved to Wahpeton, ND, where she met the love of her life, Gene Francis Lenzmeier. They were married on June 10, 1951 in Wahpeton. They later moved to Moorhead, where they raised their seven children.

Marilyn was a woman of deep and enduring faith, known for her great love of Jesus. She was gifted with many creative talents, and many people were the recipients of her beautiful creations. Marilyn embodied patience, love and grace that blessed her husband, their seven children, and countless others. Marilyn was deeply loved and will be greatly missed.

Our family wishes to extend a special thank you to the staff of the Minnesota Veteran's Home, Fergus Falls, MN, for their loving care of Marilyn during her time there.

Due to current CDC restrictions on gatherings of more than 50 people, a private family service for Marilyn will be held later this coming spring.. The family regrets having to limit the service, and would appreciate hearing from their friends and extended family in the guestbook at www.korsmofuneralservice.com. The family also invites you to view and listen to the beautiful tribute video on that site, which will be played at her service.

To order memorial trees or send flowers to the family in memory of Marilyn Lenzmeier, please visit our flower store.